Moving on to Propositions 1 and 2.

Prop 1: Yes. I can’t claim as much detailed knowledge of water infrastructure as of health policy, so I’ll keep this briefer. Prop 1 would give the state authority to borrow up to $7.1 billion, by selling bonds, to fund a large number of water capital projects. $2.7 billion would go to water storage, especially dams, although localities and regions would have to put up some matching money themselves. $1.4 billion to clean up polluted groundwater and wastewater so it can become drinkable or usable again (including in certain disadvantaged communities – more on that below). $1.5 billion to clean up watersheds, especially in support of endangered wildlife. $725 million for recycling wastewater and desalinating. $395 million for flood management, mostly working on the Delta levees. $810 million for a potpourri of improvement projects to be developed at the local level, some of which could be in the same categories as above, but also stretching to reuse/recycling, conservation, stormwater management, and other efforts.

One of the great embarrassments for California, and what really moves me on Prop 1, is that we do not effectively provide safe drinking water for all residents, There are a lot of ad hoc farmworker communities, heavily Hispanic and low-income, that literally don’t have drinkable public water. They’re often unincorporated, no city wanting to take responsibility for them. Compounding the lack of infrastructure most Californians take for granted, agricultural runoff often pollutes their groundwater, making even private wells unsafe. Really, read this Al Jazeera article: showers that make your skin itch, kids in school waiting for drinking water to be trucked in, babies turning blue from exposure. It’s a crying shame that a single person would have to live like this, but in fact up to two million don’t have public water in California alone. I don’t know if it’s enough to completely solve the problem, but Prop 1 would help these communities by preferentially allocating $520 million of the water-cleanup portion of the bill to them.

Overall, Prop 1 continues the California tradition of trying to solve resource problems by throwing concrete at them. Very few of the projects work toward conservation by agriculture, households, or industry. Little will keep farmers from continuing to invest in thirsty cash crops like almonds and then run crying to Sacramento when some predictably fail. And ideally we’d fund more of this not with bonds but with user fees, making major users bear more of the cost. But our water infrastructure is in big trouble: the EPA estimates that California actually needs $44.5 billion, not $7 billion, through 2030, to keep drinking water safe and secure. Borrowing rates are fairly low, so investments are a good deal for the next generation. While some of the projects like dams may be dubious, others, like cleaning up and replenishing the water we drink, especially for people we’ve left behind, are critical. Some wetlands might be saved or restored thanks to this. And there’s always a bit of Keynesian boost from the projects themselves. We need a change, but in the meantime, let’s vote yes.

Prop 2: Yes. This proposition is a reaction to what the last boom-and-bust cycle did to California, an attempt to keep it from happening next time. State tax revenues – especially income and capital gains – are fairly volatile, rising and falling much more than the economy at large does. I put together the following chart from State Controller data: 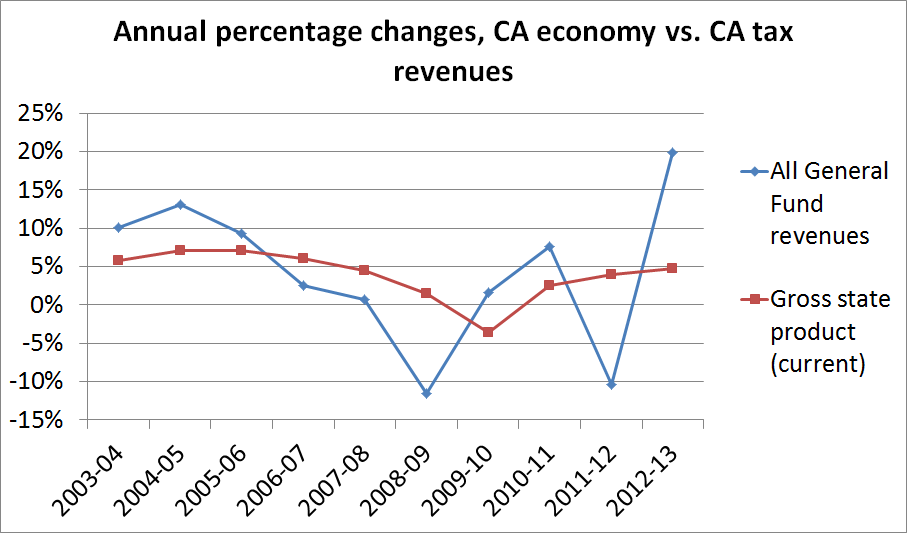 In the last decade, the Legislature responded to increased tax revenues by expanding government services and cutting taxes (Schwarzenegger’s campaign promise). When that growth turned negative, the state scrambled to make reductions, which nobody enjoyed. Although analogies between a government and a household are often flawed and dangerous (especially “live within your means”) the concept of a rainy-day fund is an applicable and useful one: putting away money in good times helps you keep level in bad times. The idea is so old it shows up in Genesis.

The details: Prop 2 would in normal years require 0.75% of total revenue to go into the Budget Stabilization Account every year, until it reaches 10% of revenue. If a budget emergency is declared, the amount contributed can be reduced or eliminated, and some money can be withdrawn. In the second year of a budget emergency, all of the money can be withdrawn. By contrast, in the status quo, the state can stop contributing into the BSA anytime it wants, and also take all the money out at any time. Prop 2 would also smooth out the ultra-volatile capital gains tax revenue by requiring above-average collections to go into the BSA too.

In addition to the rainy day fund, Prop 2 would smooth out spending another way: by requiring another 0.75% of total revenue and some of the excess capital gains tax revenue go to pay down debts. Not just debts in the form of money previously borrowed, but also “budgetary debts” – future obligations to retirees, money still unpaid to local governments, etc. Also makes sense. (Note that where the explainers say the state would save about 1.5% of revenues each year, that’s adding together the reserve obligation and the debt spend-down obligation.)

Now, I have a dislike for ballot-box budgeting in general. Government needs flexibility, and trying to tie legislators in knots so that they “do the right thing” tends to make outcomes worse. But I think Prop 2 strikes the right balance of setting new prudential standards while still allowing a decent amount of flexibility. A budget emergency is defined as either some kind of disaster (natural or otherwise) or a year when revenues are less than the highest level of the past three years, adjusting for population and inflation. This second scenario will probably kick in a lot of the time, not just in recessions – after all, reworded, it means that an emergency can be declared in any year when revenue is not the highest it’s ever been in four years. Another flexibility is that the debt repayment requirement expires after 15 years, and then the state can choose to keep spending down debt with that money or add it to the regular BSA contribution.

In this policy area that affects legislative affairs so intimately, I think it’s also a testimony to the value of Prop 2 that after a great deal of negotiation, this proposition passed both houses of the Legislature unanimously. (I put less stock in Prop 1 being nearly unanimous; there, entrenched interests and reflexive habits are more involved.)

There is no funded campaign against Prop 2 at all. But the argument you’ll see in the voter guide is about its effect on school districts, saying that it keeps them from holding adequate reserves. This has to do with the part of the measure that establishes another reserve fund specifically for education. State-level education funding is complicated – very much tied in knots by other measures – and I’m going to avoid going into any detail on this fund, but this reserve is meant to get some especially high tax revenues. Once it starts to be funded, another state law kicks in that requires districts to keep no more than two or three times their mandatory minimum reserve, i.e., spend down any surplus over that level they may already have. This idea seems to stem from a dissatisfaction in some parts of the state, particularly from teachers, with some school districts that are sitting on quite enormous reserves, some more than 100% of annual budgets, and not spending the money on education. It’s important to note that you are not voting on this law, which has already been passed by the Legislature (as SB858); the law will just not go into effect until Prop 2 does. It seems a little clumsy a measure – perhaps higher reserves than it specifies would be more prudent – but the Legislative Analyst says due to the conditions that have to be met to fund the new state-level school reserve, the limitations wouldn’t kick in for at least a few years. Most importantly, since it’s just a law, not part of the constitution, if it has perverse consequences down the road, the Legislature will be completely free to repeal it, so I don’t think it’s much of any worry. The crucial fact is that the rainy-day fund would help schools by stabilizing education funding at a higher level.

Finally, a note on campaign finance. Propositions 1 and 2 are intimately connected – the Governor seems to consider them part of his legacy. The vast majority of funding for them has been through two committees supporting both at once; the committees supporting or opposing 1 or 2, singly, have raised less than half a million dollars, whereas the “for 1 and 2” committees have $4.6 million. It’s an interesting mix of labor, agriculture, a few billionaires (Reed Hastings of Netflix, the Fisher family of the Gap, Stewart Resnick, Marc Benioff), and miscellaneous other bigguns (the hospital industry, a health insurer. even Disney). Seems to be a combination of wanting projects built and perhaps wanting to get in good with the Governor. In this case at least, nothing that rings my alarm bells.

So again, that’s yes and yes. Stay tuned for some local initiatives (especially you East Bayers).