I’m writing this for people who want to know with the ACA (Obamacare) repeal: What on earth is going on? How much trouble are we really in? And is there anything I can do about it?

Fundamentally, of course, nobody really knows what’s going on – it’s all a blur of Republicans and meat. And even then, don’t take my word as that of an insider’s; I’m working mostly from media informed by policy knowledge.

The short story is that:

Those are the highlights. Below are the details of the big picture we’re facing, what the GOP bill does and what else the GOP has in store, and their internal politics we unfortunately have to push within.

Ryan’s “American Health Care Act”, or AHCA, does many things; they all boil down to “them as has, gets, them as hasn’t, doesn’t”, and an overt hostility to the idea that health care is a right.

Of the three biggest changes it makes, the first two are to Medicaid, which is run at the state level and is not at its core private insurance. The last is to the subsidized private insurance system for those at relatively higher income levels, which the media focuses on more. I give Medicaid pride of place because it serves the most low-income and vulnerable nationwide. Under the AHCA: 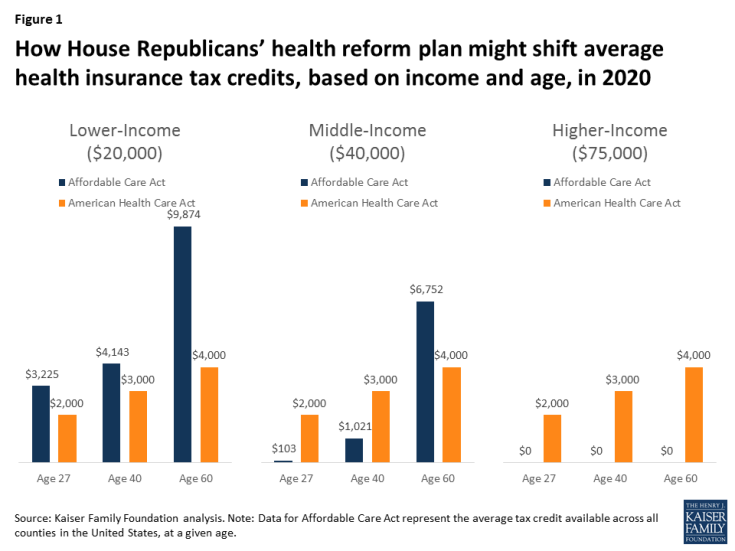 As has been heavily discussed elsewhere, what the Republicans clearly see as the crux, it repeals all the tax increases on the very high-income individuals the ACA levied to pay for it all – so it was best described, by the former head of Medicare/Medicaid, as as “a tax cut funded by gutting Medicaid”.

The Medicaid cuts are not about disputes of how insurance should work or whether there should be mandates: they are cuts on the people least able to afford it, those who if you examined their personal situation and asked what the reasonable monthly premium for them to pay for health care would be, you would say “$0”. And for the people who could perhaps afford something for their health care, the AHCA doles out a small amount and then washes its hands of the matter.

The overriding theme of the AHCA is: if you can’t afford insurance, it’s your fault for being poor. If the insurance you have isn’t helping you, it’s your fault for buying it. It is pure deprivation and callousness; they are fighting the entire concept that people should ever help each other when in need. Paul Ryan was just on the Sunday shows pushing this ideologically: rejecting the question of how many people would be left without insurance, saying the issue of coverage is “up to people”, and “you get it if you want it; that’s freedom.” The law, in its majestic equality, allows rich and poor alike to make the choice to forgo either health care or food.

(By contrast, Secretary Price is not peddling ideology but merely lying his ass off, more in the style of his new boss, flatly saying coverage will not drop. I do not mention the boss’s own campaign promises – barely worth the mention.)

Precisely because they do not take policymaking seriously – aid the rich, let God sort out the rest – the Republican leadership is shutting its eyes to the likelihood that the new policies would create a classic death spiral in the private markets, as the young and healthy pull out, and those most motivated to pay into the system are the sick people the rest of the system is supposed to be supporting. (Some of these people, it envisions moving into state “high-risk pools”, but those were always inferior, and the bill provides nowhere near the needed funding levels for such pools.)

So, the next logical question: how on earth do they expect this to withstand even the bare minimum of scrutiny, to pass even a Republican-controlled Congress? The answer seems to be, they are not sure, but they have decided to take the chance. They have painted themselves into a corner, promising their base full repeal, promising their wealthy contributors tax relief, blaming everything bad about the health care system on Obamacare, including (especially!) aspects Obamacare improved; if they admit now that the ACA was a fairly centrist middle ground, congressmembers get primaried, plus Ryan probably gets ousted as Speaker.

The trouble is that when push comes to shove, the Republicans of this moment are organized as an insular, self-propelled, highly loyal movement, not around principles and voters. If the leadership tells them jump, the vast majority will say not “How high?” but “May I come down now, sir?” And this goes double for the White House, whose potential opprobrium terrifies them. So the leadership are choosing to lean on this loyalty in a pinch, and ramming the bill through, trying to get through as much of the process as possible before the Congressional Budget Office weighs in on how many millions of people it will leave high and dry. In fact, the biggest hindrance at the moment for Ryan may be the House Freedom Caucus, which despite being a small group of 40 or so is using its internal unity to push the bill even further to the right – for example, pushing the Medicaid expansion phaseout up from 2020 to 2018.

With the House such a mass of groupthink, a better hope may be the Senate. They can’t gerrymander states, are somewhat more independent, have a greater motivation to consider the long-term effects, and realize they will be blamed for causing massive gratuitous suffering. A good margin of them are from states that have expanded Medicaid – even if, like Kentucky, they obscured the fact that this was in fact Obamacare coverage – and that makes the consequences even more potentially severe for them. So there is a good chance that the Senate finds a lack of votes and quietly kills the legislation.

But we cannot rely on this to save us. With virtually no exceptions, all the senators we’re talking about would gladly vote for the bill if they knew they could not be held responsible for the  consequences. They, too, are subject to groupthink, or primary threats, or armtwisting from the White House. They are not good at policy details and could be placated by meaningless sophistry. It could still go either way.

At the end of the day, we have to rely on old-fashioned politics. All those in Congress – either house – are political animals, and derive most of their social standing from their elected position. And this means reality still impinges on their world, however much they might prefer otherwise. They know it doesn’t take a lot of honestly outraged locals to make them look bad and turf them out. Many are likely desperate at this point for a way to persuasively tell their base that doing nothing was the best option, but it’s not clear such a way exists.

Town halls, calls, and letters are still ways they gauge their communities. They might put up a good front about how the people pestering or shouting at them are not their real constituency, but they have to consider them perforce. (And if they lose the Republican seat just vacated by the man now in charge of the Department of Health and Human Services to a progressive, that’s a major temperature check for them). But for the record, even if our attempts scare them off gutting the ACA, the last thing in the world they will want to do is admit it, so success will be somewhat unsatisfactory for us as advocates.
And plan C for them (we’re already on plan B) will likely be to just repeal the ACA taxes without paying for it, which avoids penurizing or killing people but greatly worsens economic inequality and the underlying problems that brought us here in the first place. Still, that’s something we can live to fight another day on.